It may seem crazy but we (human kind) need to be on the moon. 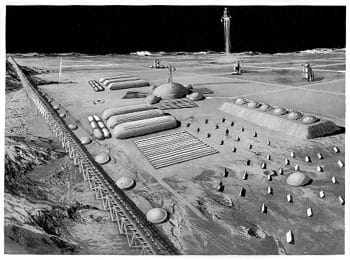 With the GFC and various wars going on it might seem stark raving mad to suggest we should be spending billions on going to the moon and setting up shop, but stay with me and I think you will see the sense of it.

Before we start I should point out that the main reasons why NASA has not been back to the moon are lack of public interest and funding, not aliens like this silly video suggests.

Why we need a base on the Moon:

If something goes disastrously wrong here on earth (take your pick) there would at least be some humans that would live to multiply and or pick up the pieces of the human race. Having a second place for at least the potential for human colonisation gives us a fall back to allow our genes to live on.

“All civilizations become either spacefaring or extinct.” — Carl Sagan

The potential for discovery on the moon is by no means exhausted. Having a permanent presence on the surface (and even below) would most certainly expand our understanding of our planets history as well as the universe.

Being on a stable surface with very minimal gravity and virtually no atmosphere would allow us to use different telescopes and radio receivers and get a new picture of our universe that would be to the Hubble Space Telescope. The far side of the moon is shielded from earth static aurora so as to provide a perfect environment for a new era of astronomy.

Mining the moon would unlock millions of tonnes of metals and elements, some of which are rare on earth.  Read more about REE or Rare Earth Elements here.

If aliens do ever land on earth we would have an early warning system. (That one was for the conspiracy nuts, we care about you too! 🙂

Establishing at the very least a base on the moon would be a logical stepping stone for the journey to Mars.

We still don’t know what the long term effects of space are on the human body. The Moon base would be an easy place for the astronauts to recover or repair if there was ever an accident in space. The slight gravity of the Moon makes a lot of things doable that are not so in open space.

In the long run, the amount of money and resources that we already know are on the Moon would more than offset the cost of the venture.

Those rare earth elements and the minerals can be made into new advanced forms of technology that may help solve some of the problems down here on earth. Or allow us to design and engineer new types of space craft or propulsion.

Space is perhaps a few decades away from being privatised. Once that happens the moon is up for grabs. Whoever lands and sets up camp first and even gets a chance to become well established would win a race every bit as significant as the journey to the Moon!

So why then considering all this and more, are we not already on the Moon?